So I've been stuck inside all day as all of Queensland is currently subject to severe weather warnings. I live on the Gold Coast and we are just about to get possibly the worst four hours of it soon, though possible tornado and flood warnings will remain for the next two days. Kind of ruined our Australia Day long weekend but right now I'm just hoping to get through it without any serious damage. 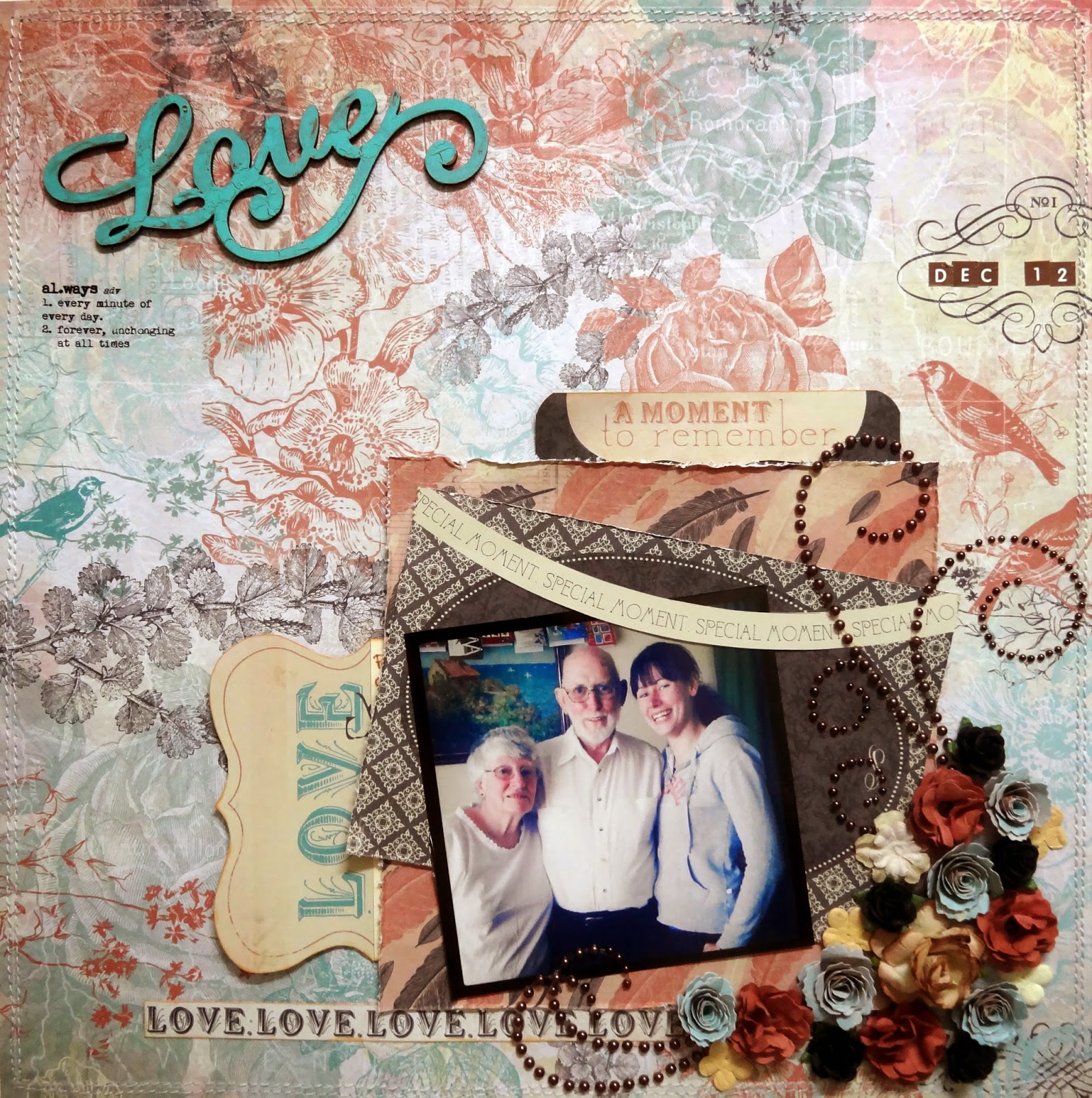 All of this time inside was the perfect chance to create another LO though. Went with a recent photo of me and my grandparents taken when I was in Melbourne last December. Journalling is hidden behind the layering, the 'love' tag pulls out so you can read it but I wanted to keep this one personal. 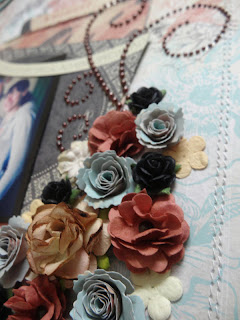 I normally avoid flower clusters because they can be very expensive but the sketch I worked from needed some. The green ones I have die-cut from a matching sheet of paper before hand-rolling. The brown one are those simple paper flowers from Kaisercraft but layered up and scrunched.

I worked from the Kaisercraft Saturday Sketch #4 for January. Papers are all from the Periwinkle Collection which is beautiful with it's cream/brown/aqua/grey colour scheme and lots of nature images. I've also used rub-ons, chipboard, flowers, mini-alphas and pearl florish from Kaisercraft.
Created by Lauren T at 20:55 5 comments:

Good morning everyone. I hope anyone else in Australia is having a fantastic Australia Day. It is wet, wet, wet here on the Gold Coast and our local council called off their celebrations so Ben and I are left without plans. Stuck at home I stumbled across the Scrapbooking Memories blog hop showcasing some great Australian companies. Besides making me consider starting digial scrapbooking (Studio Flergs designs looks great!) I also came across a great giveaway for Flair Buttons that I had to share. Like a lot of people, I have become quite taken with these buttons so couldn't pass up the chance to win 50 from Purple Pumpkin. 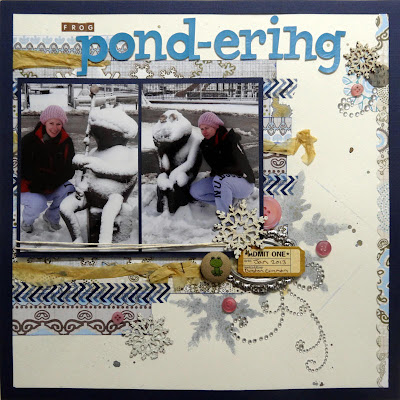 I'm going to let you in on a little secret: I'm one of those people that love bad puns! So, with these photos having been taken at the Frog Pond in Boston Common during our holiday and the photo of my pondering away with one of the statues I just couldn't resist going with this title. :) I think this LO is almost there but is lacking that extra 'something' to make it pop. Any advice is welcome. 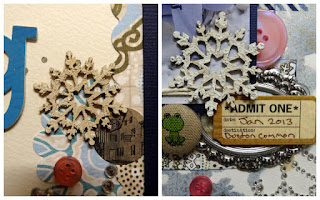 I figured this LO was the perfect opportunity to use some of the beautiful Scrapmatts snowflakes. I mixed up some texture paste, white acrylic paint, sand and a touch of blue/gold glimmer mist then painted it on the snowflakes to add some texture. I really liked how well they took the weight of the paste whilst still retaining the delicate details. 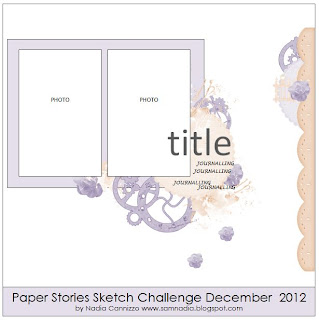 This LO was created for the Paper Stories sketch challenge, which was extended to include January as well. I drew inspiration from Georgia Heald's example LO for the layered background photo mat.
Created by Lauren T at 21:43 1 comment: 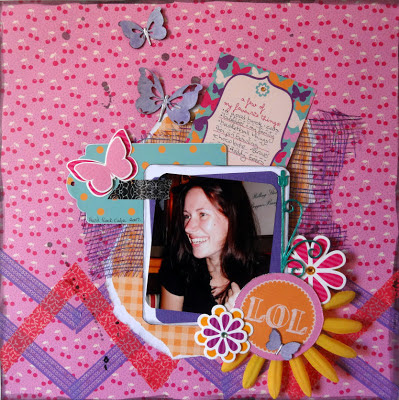 This page is a quick introduction to me as part of my Design Team commitments with Scrapmatts for 2013. I went with an older photo of me that I felt showcased my personality well. I think one of my favourite things to do is laugh and make others laugh. I've also listed a few of my other favourite things on the journalling tag. 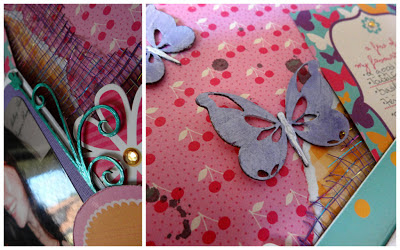 Close up details of the great Scrapmatts chipboard on this LO. The card border has been painted with liquid pearls. The butterflies has been sprayed with GlimmerMist and the bodies covered in liquid pearls The wings have been lifted from the page for extra dimension.

This LO was created for the ScrapFriends sketch challenge #9. It also fits the criteria for Punky Scraps challenge #59 which is to scrap all about you. 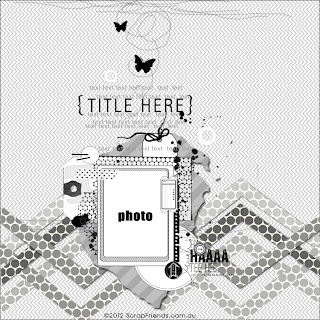 Our second DT challenge for this month was to create a page with the theme of 'new'. I have chosen to scrap a photo of my husband and I celebrating the New Year in Central Park, New York. 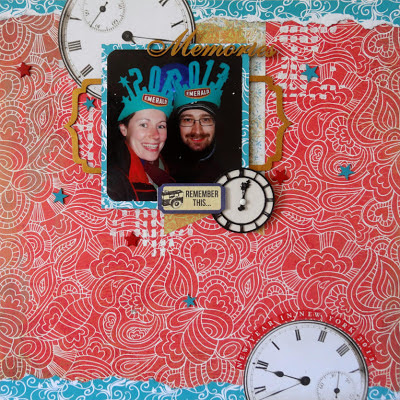 Close up of the chipboard used in this LO. I have cut the nested shape into smaller pieces to use it as a frame for the photo. The Christmas stars mirrored the stars on our hats so I've chosen to use them here rather than a Christmas LO. 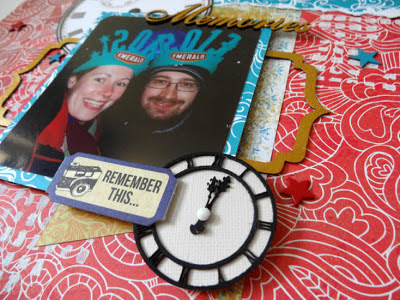 This LO was inspired by Sketch #51 for Keeping The Best. It also fits the criteria for ScrapFit this month which is to use stars. 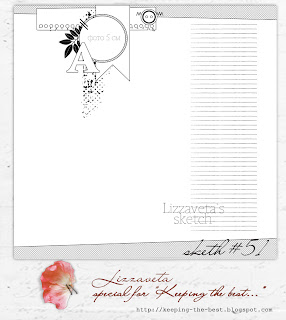 I'm back from America!

Hello again dear readers. I hope you all had a great Christmas/ New Year period. After getting to catch up with my family in Melbourne I went travelling in America with my husband for two weeks. It was very exciting as neither of us had been before. I took SO MANY photos that I decided to just show off my favourites in some collages.

I will be back with crafty goodness later this week. 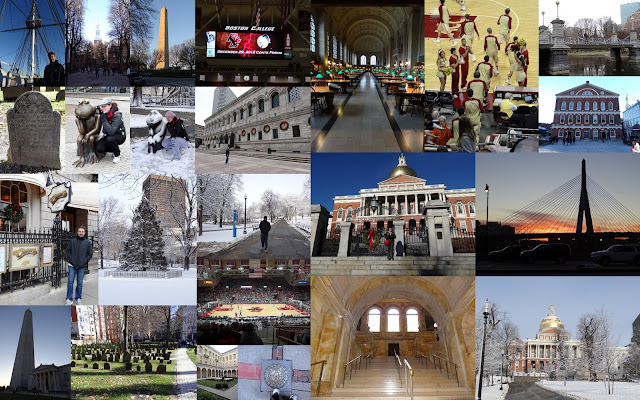 We spent two and a half days in Boston and got to see snow which is a rarity for us living in a sub-tropic region normally. I loved doing the freedom trail. 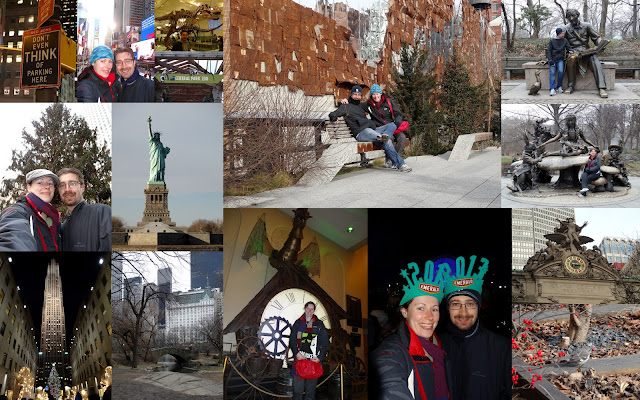 We spent six days in New York, including New Years. We tried to do Times Square for the ball drop but weren't keen on standing around for so many hours so went to the Emerald Nuts Midnight Run in Central Park instead - much more fun! Also checked out Wicked on Broadway, the High Line and a harbour cruise. 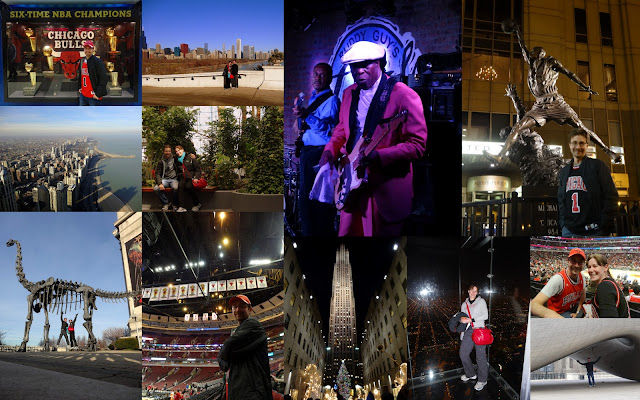 Lastly, we spent six days in Chicago which was also fantastic. We saw two Bulls games which was the highlight for Ben.
Created by Lauren T at 18:37 3 comments: 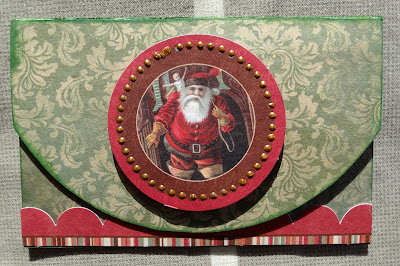 The challenge over at Unstampabelles this month is to use one of more die-cuts in your creation. I seem to go through patches where I don't use a single die-cut and then other patches where I use them on everything. My DT sample is a gift card holder I gave my brother for Christmas. It uses Kaisercraft papers and die cuts with some liquid pearl accents.
If you're wondering why my blog has been quiet recently it's because I'm actually on holiday in America for 2.5 weeks. I'm sure there will be plenty of photos to share when I get back though. :) Hope everyone is having a great start to the new year!
Created by Lauren T at 07:00 3 comments: