So back on 7 October 2013 I wrote about some issues in real life which had kept me quiet on the blogging front. My grandpa passed away on Tuesday 24 September 2013. He was first diagnosed with prostate cancer back in 2003, treatment was successful and life moved on. However, in 2008 tests showed the cancer had returned and over time, despite multiple treatments, the cancer spread to other parts of his body. In late 2012 it was deemed terminal and it was just a waiting game since then. Towards the end he was in a lot of pain almost constantly so whilst his passing is gut-wrenching there is also a sense of relief.
(removed for publication)

These photos are two of my favourites from my wedding in 2011. I had held on to them for a special layout and decided they would be perfect for a tribute page. There is no journalling because the pain is still too raw to put into word but I might add some later. 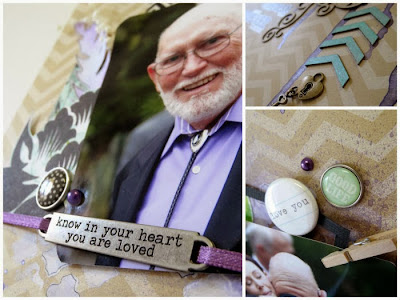 I used the Scrapfriends sketch for October as the inspiration for this layout. The sketch was so fantastic and full of details that I kept to it almost exactly other than to rotate it to the right and remove one of the photos. Frosted Designs have a fortnightly challenge of kraft, flair and chipboard at the moment, so I'm also entering this LO into their competition.
Created by Lauren T at 09:00