Outside the Rectangle ATCs

I am again just squeezing in before the deadline for this trade, which is actually 1pm today! The theme for this months live trade was 'Outside the Rectangle' so basically the ATC just had to be in a shape other than the standard 2.5 x 3.5 rectangle. Right away I knew I wanted to do a stained glass window design and for once I didn't change my mind halfway through the month. :)

You can see my final design below in both the open and closed views. I'm pretty happy with how these turned out. They took FOREVER to do because there was so much down time with waiting for paints to dry. I think my favourite part is the stone edge, which I used texture paste as the base coat to make it really rough and stone-like. It was get to play with my Twinkling H2O's again as well. They've given the window a nice shimmer. Anyway, I can't wait to see what all the other ladies have come up with for this one. 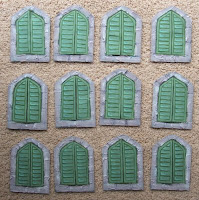 Created by Lauren T at 11:21 No comments: Links to this post

Email ThisBlogThis!Share to TwitterShare to FacebookShare to Pinterest
What's in this post: ATC - Mixed Media/ Other, ATS Monthly Trade

Chunky Bird Book and Some ATCs

Having to complete those Pick-A-Theme ATCs last week reminded me that it had been a while since I really created anything and that I feel a lot better when I'm spending the day creating rather than just wasting it. Plus, I again have waited until the last minute and need to crank out some work before the mailing deadline passed. :)

The project this time was a 'Funky Birds' chunky book. Chunky books are 4 inch by 4 inch works of art that have some form of dangly embellishment hanging from either the right or bottom edges. Once you get a collection of individal pages you put them together to form a book and the cumulative danglies result in the chunky effect. The very first one I took part in was a 15 page bird trade and I've been hooked ever since. They are quite pricey to mail, since I live in Australia and most of the hosts are in America, so I don't get to play quite as often as I'd like. I have still managed to accumulate books for birds, mermaids, monkeys, africa, and love. 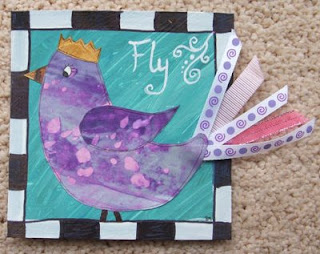 So the page above was my first sample design. I like to try to incorporate my danglies into the page design, rather than just have the attached to a corner. I was pretty happy with how it turned out, so didn't change too much for the final design, which you can see below. For this swap we only had to trade 5 pages. I'll send an extra one for the host and be left with 2 for personal trades in the future. 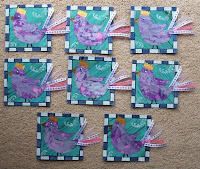 I also managed to create some ATCs. These were done using the Bernie Berlin technique of painting gesso over magazine images and then re-painting the image. I've also used coloured pencil to add some texture and shading.

In other news, I left a scrapbook challenge for Bridge who had lost her mojo. The challenge was to use the colour blue, clouds and lace. You can see the beautiful LO she created here.

Created by Lauren T at 17:38 No comments: Links to this post

It's been a while but I have finally created something crafty again, mainly because the due date for the swap is looming. :P So I managed to create 4 ATC's today for the "What's My Style?" Pick-A-Theme swap over at ATCsforAll.com. I was probably a bit nasty of me to sign up for this since I don't really have a style of my own. Rather than picking an individual theme for this PAT, each player received cards in an approximation of their style. I signed up for a very cool group!


Janet (crafter412) - I felt a lot of pressure for this one because her cards are just so beautiful. I've collected her landscapes from when she was a newbie at ATCs. While most of the cards I have of hers are watercolours I noticed that she's doing a lot more work in acrylics so that's what I went with. The card is based on a photo I took at Cape Byron Lighthouse. When I showed Ben this one he actually told me to hang onto it because he thought it was so good. :)

Acacia.rose - I was originally going to make a card with chalks and a thick black border, but then saw a more recent set of jungle animal cards she had done and I just had to go with that style.

TotollyOzSome - She has such a cute and simple style. I don't know how she managed to get so much character into her cards, but I struggled to copy that. Anyway, I just couldn't go past a flying monkey since I know she loves them. It's loosely based on one in her gallery.

Lemurkat - I have watched Kat's art for years so I hoped this one would be easy. Wrong! I chose to draw a Golden Pheasant, as Kat loves birds and I thought this one looked strange enough to take her fancy. Unfortunately, it's not endangered like most of her subjects but I'm sure the bird thinks that's a good thing. ;) I tried to get the colouring and background right, plus didn't forget her stylised sun.
Created by Lauren T at 22:47 3 comments: Links to this post

I had my university graduation ceremony on Saturday. Dad quite nicely offered to fly my brother and sister up so I could have some moral support, which I very much appreciated. It was great to get to catch up with them both, even if it was just for a weekend. I didn't trip at any stage of the day so that counts as a success. :) We had some professional photos taken too which I'm hoping will turn out nicely though the guy rushed us through a bit. We all went out to celebrate for dinner and came home to play Guitar Hero and Rockband until 2am. Ben was in heaven having new people to show off to. :) Kirby developed some mad drumming skills and got almost-blisters to prove it. 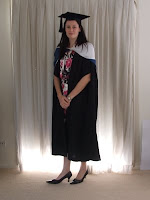 Me in my robes before heading to the ceremony. Yes, I know I need to buy a new dress now that this one has served in the last three special occasions. 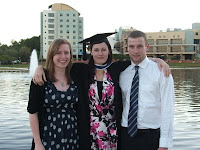 My sister, Kirstin, and brother, Michael. 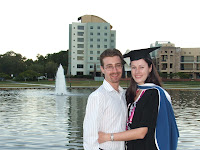 My darling Benny! That's the "Fountain of Knowledge" in the background, can't get much cornier that that.

In a more artistic vein, the only thing I've managed to create recently was the back page of the circle themed friendship journal. This was finished a while ago, but I forgot to post it. Used a modified version of the credit card technique on the background because I think I'm in love with the results it gives. Tried to add more depth to the backgorund with a few more layers. Happy with the end result. 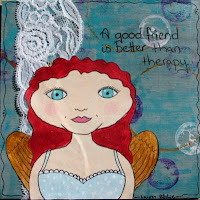 Created by Lauren T at 17:31 No comments: Links to this post

8 Year Anniversary and... I Got Engaged!

Yesterday was my 8 year anniversary with Ben. To celebrate he booked a long-weekend (Saturday to Tuesday) getaway at Byron Bay, NSW. For those who don't know, it's a little hippie/arty town on the beach just down from the NSW/QLD border. We stayed at Azabu, a stunning B&B just out of the town. It's set amongst the beautiful rainforest/swapland of the area. You can see how much we're enjoying our stay in the photo below, taken just after arrival. We spent the weekend checking out the view from the lighthouse, checking out the independent/alternative stores, browsing the arts and industry park and just relaxing in general. We also had the joy of a couples massage together, which was lovely. 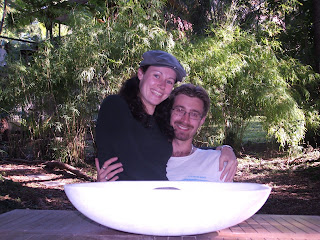 Ben and I in Azabu's "reading gazebo" in their gardens. 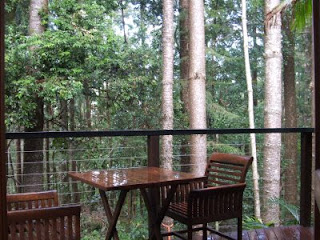 The view from our bed. The lack of curtains made it a bit cold in the mornings, but it was worth it. 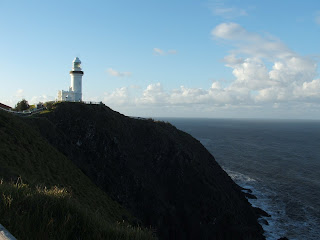 The lighthouse at Cape Byron.

Visiting the lighthouse at Cape Byron was a real highlight for me. We went at about 4pm on the Saturday, so got to admire the view in the daylight. From the lighthouse it's only a short stroll to the most easterly point of the Australian mainland so we took a walk to that. Ben then decided he wanted to follow the walk all the way down to the rocks and the beach at the bottom. It's actually a fairly touch 3km return trip, but I hadn't realised it was that long when I agreed. :) By the time we were on the way back up to the lighthouse the sun was setting and it was stunningly beautiful. 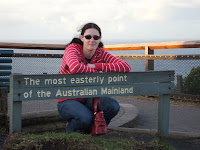 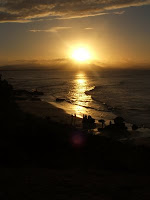 Me, and one of the beautiful sunset shots we took.
The lighthouse is also special to me because Ben took us back up there on the Monday at 6pm before dinner. The light was actually working so it kept sweaping over us as we stood in the carpark looking out over the lights of Byron Bay in the distance listening to the waves crash on the beach with some bongo music in the background. Ben then popped down on one knee and asked me to marry him! Even though I had been expecting it, it was still a lovely moment. 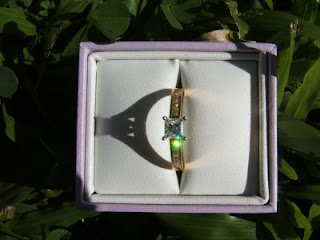