This is the first layout I created at the Noosa Retreat however it is also one of my design team pieces for Scrapmatts so I couldn't share it until my reveal day today. The photos are from my holiday to America in late 2012/early 2013, specifically Boston Common on 30 December 2012. Ben and I were scheduled to drive from Boston to New York that day so it was the ONLY day of the holiday we didn't want snow, in typical fashion a snow emergency was declared the night before and that ended up being the only snowfall we saw all trip. :P


The brief for this one was to take something old (chipboard) and make it NEW. I took the old leftover chipboard negative from the snowflake design and turned it into a feature of the layout by painting it with gesso and Gelatos and backing it with gyprock tape. I have also painted up so of the cute snowflakes to run down the left side, used the tree and typewriter letters and used just one half of the 'Seasons Greetings' piece for my title. 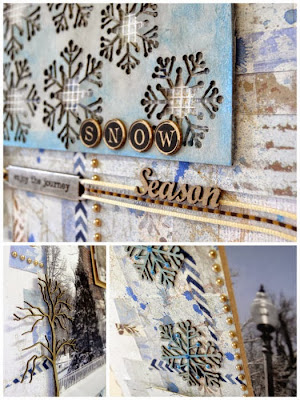 The overall technique here was using one I learnt from Georgia Heald's online class. So versatile and a great way to use up the scrap pieces of paper you wouldn't normally use. I was also inspired by the current sketch over at Creative Scrappers #252.