I have had this LO partially done for about a week now and only just got around to finishing it. It's of my family cat, Artemis. We bought her a few years ago from the Greensborough Cat Shelter and I talked the rest of the family into choosing her because she sneezed when we were looking at them all. I thought it was so cute, especially since I was sneezing too by that stage being surrounded by so much cat hair. I thought she was going to be a fierce little kitty, so I called her Artemis after the goddess of the hunt. She's actually the scardiest cat EVER and runs away from everything and everyone. The patterned paper for this LO came from a kit I bought for $2 from Spotlight. It will be another entry into the Gold Coast Show. 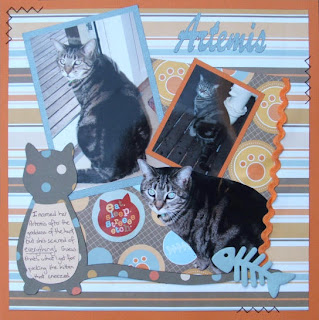 In other crafty news I spent a few days last week making up invites to my engagement party with Ben to be held in September. They took a fair while, with the ribbon being the most frustrating part as it kept wanting to curl up into the roll shape it had been stores in. I'm happy with the finished design though. You can see a sample below, with certain details blurred out.