This LO is mainly done with papers, stickers and transparencies from the Heidi Grace Sweetest Bug range. I've had all of these materials for so long because I thought they were adorable but struggled to actually scrap with them. The chipboard title is from Imaginarium Designs, as is the butterfly I used as a mask. I received my winners pack in the mail about a week ago and there is SO much chipboard included. I was expecting maybe three pieces but I've received 12! 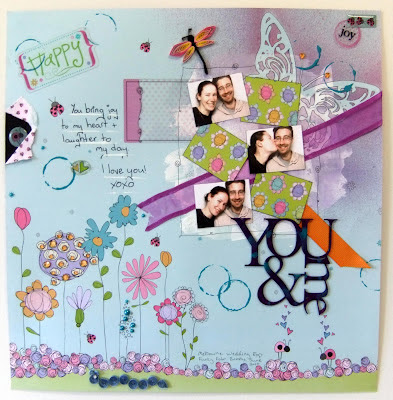 This LO was created for three challenges. Punky Scraps released a recipe challenge on Friday, you had to use a minimum of three suggestions from: hexagons, white paint, make a grid, use small photos, no pink, use three circles, use three squares, and use something transparent. The white paint, small photos and something transparent should all be obvious. I used rectangles rather than squares for the photos and patterned paper and laid them out in a grid pattern. I've used more than three circles in the turquoise paint background. No hexagons though ad I did use pink, can't win them all I guess. :)

Bird is the Word's challenge word for Feb 12 is 'heart' which I've used in my journalling this time. Finally, ScrapFIT is another new challenge blog I've found. Workout #62 requires some 'xoxo's in your LO, so that's how I've signed off my journalling.

Don't forget I'm giving away some free rubber stamps, details in this post.

Email ThisBlogThis!Share to TwitterShare to FacebookShare to Pinterest
What's in this post: Bird is the Word challenge, Punky Scraps challenge, ScrapFIT challenge