5 years of blogging and a giveaway!

Wow, can you believe I've been blogging for 5 years now? I know it surprised me to find out it had been that long when I sat down to write this post. I like to take this time to reflect on my scrapbooking achievements of the last year and my goals for the coming year.

So to compare the statistics of my blog over time, here is a quick snapshop of my progress since I started doing these reviews three years ago:


Wow, only three more followers in a whole year (two of those in the month too)? I think that definitely surprised me. The slower growth in page views and posts was to be expected though, as I've slowed down in terms of my creations in the past couple of months. Interestingly, stats show my visitors per month peaked in December 2011 and it's just been pretty much down will since then. My most viewed blog post is Playing with Seals and Dolphins from June 2010, which isn't even a crafting post! :( 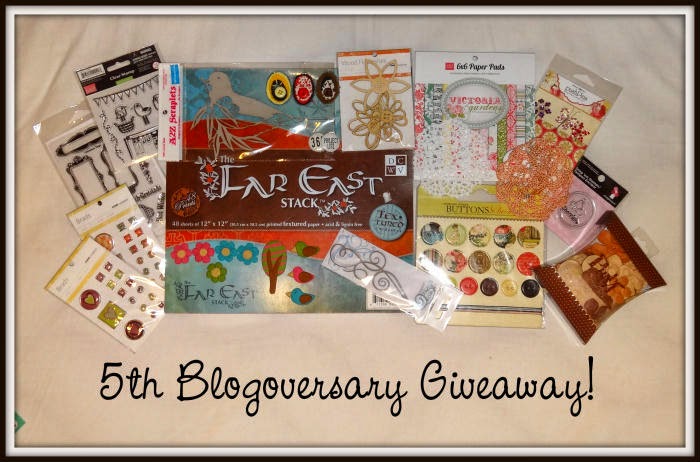 Anyway, you can't have a birthday without presents so I've decided to host a giveaway which will run from now until midnight Australian Eastern Standard time on 15 May 2014. This includes quite a variety of bits and pieces including paper pads (12x12 and 6x6), chipboard shapes, Prima flowers, crochet doilies, flairs, stamps, brads and some extra embellishments.
The rules:
1/ Leave a comment on this post with either a) your own scrapbooking goal for this year or b) a tip to gain more followers.
2/ Competition is open internationally.
3/ If you share this giveaway (on your own blog, facebook, twitter etc), post another comment to let me know and you'll earn another entry.
4/ If you become a follower and post anther comment to let me know you'll earn other entry.
Created by Lauren T at 08:00