Alice in Wonderland High Tea for 29th Birthday and The Color Run.

I took some time away from scrapbooking memories to go create some new ones this weekend and had such a ball doing it. On Saturday I had my 29th birthday party at RACV Royal Pines Panorma Lounge with an Alice in Wonderland themed high tea. I love high tea's and the one at Royal Pines is very reasonably priced. 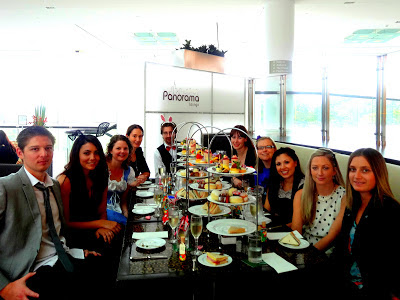 You can see a couple of my friends got into the costume theme, including my lovely husband down the end who came as the white rabbit (fluffy tail included). My costume was such a drama. I originally purchased a queen of hearts dress online but upon arrival I found it was too small and VERY short. I ended up wearing the skirt part, teaming it with a corset I already had and purchasing a jacket which I hope to be able to wear to work after this. The sequin hearts were originally on the top of the dress so I unstitched them and put thme on safety pins to form badges which I placed on the collar. It's finished with some high white socks and red shoes. It ended up looking pretty anime but still pretty cool. 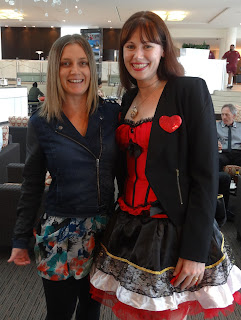 No party is complete without some decorations. I went with six of these cute little card guards, plus some chocolates and bottles for all the guests. We had the bottles left over from our wedding two years ago so thought it was time to use them up. I also created a feature tea pot but I'll share that tomorrow to keep the total photos in this post down. 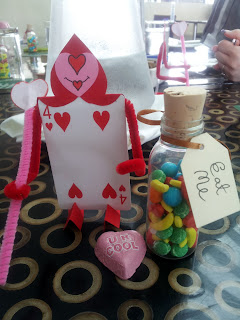 On Sunday we had The Swisse Color Run on the Gold Coast. It was originally scheduled for April but was rained out then. I was a bit nervous about running the 5km this time as I hadn't been able to keep up my training for the last two months due to working in the city but I needed have worried as it was a very easy course and we walked/danced quite a bit of it.
Here is my team, The Runbows, at the start of the day. 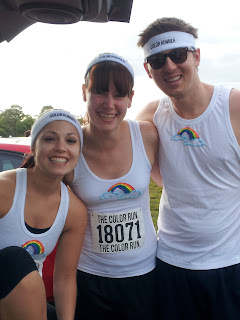 Aaron and Nadia and starting to get a bit colourful during the run: 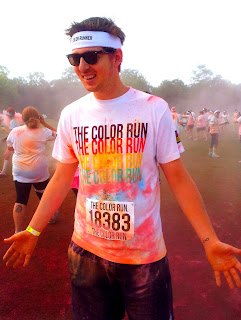 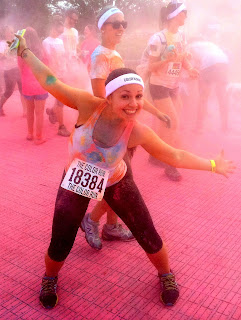 In the finish festival and Nadia had pelted me with her purple powder: 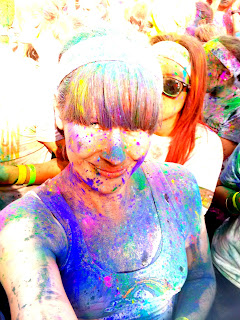 Here we are right at the end, having been in the finish festival for quite a while. As you can see, it was a whole heap of fun and a scrapbookers dream with all these colourful photos. :) 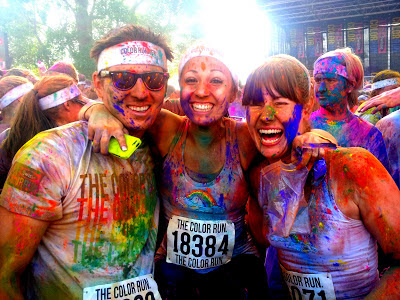